Dr StrangeJob was relaxing on his deck listening to Buddy and the Boys when Officer Richard (Dick) Less pulled into his driveway in an unmarked police car.

“Hello, Doc, sorry to bother you but I was asked to escort you downtown. They want to talk to you about the incident at the Mayor’s press conference.”

“Oh, by incident you must mean where I was forcibly thrown out of the session for trying to take responsibility for the unscheduled sewage dump in Sydney harbor,” retorts Dr StrangeJob.

“Hey, I am just following orders,” replies Officer Dick Less. “We can do this the easy way or the hard way–your call.”

“Fine. Just let me leave a message to where I am going.”

Dan opens the meeting by forwarding a copy of his PowerPoint lecture notes to the group.

Digression: PPT Syndrome, a rare communication disorder, thwarts open dialogue and limits both the afflicted and affected to Microsoft PowerPoint presentations. Although rare, PPT Syndrome is often associated with educators who exhibit an over reliance on publisher-supplied support materials.

“Ok, the first three slides provide background for our next mission,” says Dan, as the group fumbles with their phones.

“What’s the wifi password for this place?” asks Madi, the group’s Communication Officer.

“No thanks, I already have tea,” replies Dan, “So let’s begin the presentation.”

Slide 3: CBRM seniors are living in cramped housing and could use some cheering up.

“This next slide is very important, so please pay attention,” states Dan.

“Ok, so that’s the plan. Any Questions?”

“Can we just blow up the existing flower pots?” asks Psycho Sam.

“No, Sam. Our goal is to raise the issue of CBRM’s allocation of limited financial resources, not to destroy public property.” says Dan.

“So, we help feed the hungry while cheering up senior citizens, rather than hanging flower baskets in support of potential cruise ship visitors,” suggests Zippy, “I can get behind that.”

“I agree as well,” says Madi, “but after the stink we raised with our last escapade, we need to be more careful with this mission.

“That’s true Madi,” replies Dan, “And that is why we asked Doc Spinolee to ensure that all InComps missions follow ethical guidelines for civil disobedience. I turn the floor over to Doc Spinolee.”

Doc Spinolee begins a PowerPoint free discussion on the ethical implications of civil disobedience and concludes, “From the utilitarian perspective, the potential for greater good derived from feeding our hungry and supporting seniors will outweigh any possible harm incurred by removing the original flower baskets.”

“So, what you are saying is that we are good to go on this one?” asks Zippy.

“But should we consider opposing arguments just to be safe?” interjects Madi.

“Well, I guess we could consider Kant,” says Doc Spinolee.

“Can’t!, What do you mean can’t, you just said the mission was good to go,” says Zippy.

“No, I did not say can’t, I said Kant,” states Doc Spiniolee.

“I’m confused,” says Madi, “Are you saying we can or can’t do this mission?”

“All I am saying is that Kant provides an alternative view as to the possible ethical implications for this particular mission.” says Doc Spinolee.

“There you go with the can’t again. Hell, let’s just blow something up.” moans a frustrated Psycho Sam.

“Let me clarify: I am not saying can’t, I am saying Kant!” replies Doc Spinolee.

“Christ, I feel like I am in an Abbot and Costello movie,” says Dan.

“Who?” reply all patrons of Doktor Jule’s Luke’s under the age of forty.

“Ok, now that we have that settled, let’s get back to business,” says Dan. “We will need someone with a green thumb to create the feeder bins. Any suggestions?”

“I know Andre Le Pouce Vert. I bet he will help.” says Madi.

“Was he the dude that planted food gardens around his neighbourhood last year?” asks Zippy.

“Yeah, I remember reading about that. OK Madi, see if you can get him on board,” says Dan.

“What are these food baskets going to look like anyway?” asks Zippy.

“Well, actually that brings me to my last slide,” says Dan. “This slide shows the prototype food bin that Madi and I swapped out in front of City Hall.” 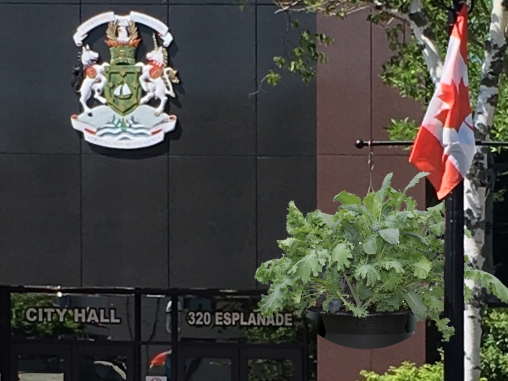 Con, staring at Slide 5, blurts, “Looks like the kale stolen from my garden!”

“Well, you weren’t home at the time, so Madi and I liberated your kale.” says Dan.

“Wait, you just can’t do that!” exclaims Doc Spinolee.

“Are we back discussing that Kant dude again?” asks Zippy.

“No, I did not say Kant, I said can’t,” replies Doc Spinolee.

“Let’s not go down that road again,” states Dan “Let’s speak one person at a time.“

….. meanwhile, Dr StrangeJob has been escorted into the office of Ms Lied-Toomey, CBRM’s Secretary of Disinformation.

Competence is our final frontier. Join the farce and support the journey of the CBLA-InComps. Their mission: to expel incompetence, to seek out the competent, and to boldly go where Caper heroes have gone before. We are legion. We know who you are. We are going to the Legion.